Thanks to you, my son is alive! 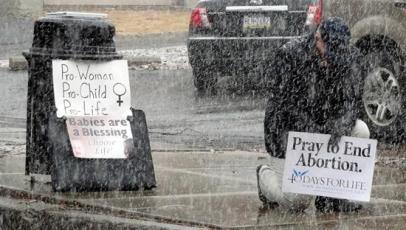 Definitely not Vancouver, BC. This is in Lancaster, Pennsylvania.

You may never know how God used you to save a baby from abortion … but occasionally He will show you!

When we report the number of babies saved during 40 Days for Life vigils, we always add the phrase “that we know of.”  There are many women who change their minds and leave the abortion centers or simply keep driving and never go in for their appointment.

Occasionally, though, 40 Days for Life volunteers find out much later that a life was spared. A young woman will approach them with a small child, a big smile … and a huge “thank you!”

It’s a beautiful occurrence and one that makes it all worth it. Here’s one of those stories …

When a young mom in her early 20s who lives in the surrounding neighborhood came down the street carrying her son on her hip, one of the 40 Days for Life volunteers greeted her as she was passing.

She responded with “Hello!” and then added, “Thanks for what you do,” as she continued to walk by.  Then suddenly, she stopped, turned and said, “Thanks to you my son is alive.”

During Lancaster’s fourth 40 Days for Life campaign in the fall of 2013, she came to Planned Parenthood determined to sign up for an abortion, which she was convinced she wanted and needed. When she saw the volunteers praying outside the building, she avoided them and went inside. After completing all the required paperwork and “counseling,” there was nothing left to do but watch a short video.

“She went into a room, sat down alone and started the DVD,” said Bob, the local leader in Lancaster. “But she couldn’t get those who were praying out of her mind. Suddenly, she realized that they were right … ending the life of her unborn baby would be a tragic mistake.”

She stopped the DVD, got up, left the building … and never looked back.  Her son is now a healthy one-year-old and is deeply loved.